Why the federal bureaucracy matters 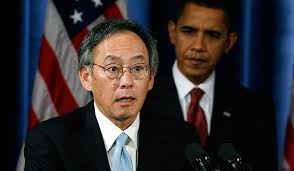 If the title to this post sounds like a full-throated defense of big government, it’s not.  It’s merely an acknowledgment of reality.

There was a really interesting piece in Forbes the other day on Steven Chu, President Obama’s Secretary of Energy.  Chu, the article asserts, “is likely to have greater influence over the world’s future energy economy than any other single person alive today.”  Why?  Because the energy secretary is literally presiding over a time of unprecedented research and development within his department.

Here’s one cutting-edge example from the Forbes article:

Last year, the Department of Energy awarded a $130 million in federal grants to a team or researchers led by Pennsylvania State University and United Technologies to establish the Energy Efficient Building Systems Regional Innovation Cluster in a 30,000-square-foot building in Philadelphia’s Navy Yard. The hub is piloting a portfolio of advanced energy-efficient building technologies and designs using sophisticated sensors and modeling equipment with the goal of creating technologies capable of reducing energy use in existing buildings by 50% by 2015.

R&D is different from the other ways that the federal government invests in energy technology.  We mostly think about this support as coming in the form of tax credits, various subsidies, and loan guarantees, which of course have been in the news recently in connection with the Solyndra controversy.  But while most tax and subsidy provisions and loan guarantees go to companies developing proven technology, research and development projects focus on technologies that are either in their infancy, or haven’t even been invented yet.

As can be seen in this telling graph, the energy sector in the United States spends a smaller share of its profits (just 0.3 percent) on research and development than any other major industry.  Right now, the federal government is stepping in to fill some of that void, and it’s doing it through an innovative approach based on a research platform that Chu himself pioneered while at Stanford University.  The centerpieces of the Department of Energy’s program are called “Energy Innovation Hubs,” which bring leading scientists and engineers together to collaborate on developing next-generation energy technologies, like the efficiency systems mentioned above.  After an ongoing process of trial, error, and feedback, technologies are eventually ready to be used on a commercial scale.

It’s an interesting concept, which will be even more interesting to follow as it begins to bear fruit in the coming years.  Lest anyone dismiss the potential for government research to deliver tangible results, perhaps it might be instructive to review the list of technologies developed by NASA that now play an important role in our lives.  Some highlights: LED lighting, artificial limbs, aircraft anti-icing technology (keeps your plane from crashing), tempur-pedic mattresses, consumer water filters, dustbusters, firefighting equipment, and those grooves in the highway that keep you from running off the road.

She would hate big government more if it weren't so good for her back.

How does this relate to energy?  In a functioning economy, government and private industry depend on one another – just as support from the private sector is the only means for a technology or product to become mainstream, the government is often the only source of capital for promising technologies that have yet to become commercially viable (see Internet, the).  Under the current presidential administration, the energy technologies of the future are being given an unprecedented level of support.  It’s true that not every one of these technologies will work out.  It’s also true that the Department of Energy, in total, receives about 1 percent of our federal budget every year, which means the country should be able to afford to invest in systems that could transform the way we create and use energy in the United States.

This is why bureaucracies matter.  President Obama isn’t pulling the strings on the DoE’s innovation hubs, but he is responsible for putting people like Steven Chu in positions where they can make a difference.  Given the hard-line rhetoric of each of the president’s potential opponents next year, it’s unlikely we would see anywhere near the kind of energy innovation we’re seeing now in a Romney, Gingrich, Perry, or Cain administration.

We may still live in a society that is fundamentally powered by carbon-based fuels, but there’s a lot going on behind the scenes.

Energy & Environment from the NYTs